In 2008, with his debut novel, MEAT, Joseph D’Lacey sprayed the scene with blood. Even Stephen King said its author ‘rocks’. Garbage Man came next, after which we heard little from D’Lacey until earlier this year when Angry Robot published Black Feathers (reviewed here). During this interval, his first novels fell out of print. But we’re in for a treat this Halloween, as both MEAT and Garbage Man will be re-released, or as D’Lacey calls it here, reconstituted and recycled.

MEAT twists around the mechanized workings of the industrial slaughterhouse as only a grim and uncompromising horror novel can. Set in a future devastated by an unspecified apocalypse, one small settlement holds out, surviving on meat. Sacred meat. I don’t think it will come as a huge surprise where this meat comes from, because that particular twist isn’t the point. The point of this novel is the exploration of what participation in such a soulless and mechanized form of taking life does to the psyche, which then leads the reader to consider the nature of human cruelty in general, how we’re able to hollow ourselves out of our own humanity and become less than the beasts we slaughter. Can we save ourselves from such a spiritual death? I don’t know. Read the novel and find your own conclusions. I won’t go so far as to say this novel changed my life in the way the research and writing of it changed D’Lacey’s (he’s now a vegetarian), but it certainly got me to thinking more about the food I eat. The same could happen to you, especially if you follow his advice in the post-script, where he suggests you go online and look at some slaughterhouse footage. Do it after reading the novel. Go on. Read the novel. Look at the footage. Then think about it next time you’re faced with a plate of veal. I dare you.

I had a chance to ask D’Lacey a few questions about the novel and its imminent reconstitution. I first asked him to talk a bit about MEAT’s gestation.

RK: Talk a bit about how MEAT came into being.

JDL: MEAT evolved from a collision of ideas and circumstances: my desire to write something truly gruesome, a long-standing fascination with the ‘ethics’ of killing for food and the proximity of my home to a real slaughterhouse. At the time, a story about humans farming humans for meat seemed full of possibility and MEAT was the result.

RK: That novel earned some wide acclaim. Stephen King read it and proclaimed that you ‘rock’. You won the BFS award for Best Newcomer. But after your second novel, you didn’t publish any more novels until this year. What happened?

JDL: Despite the attention the novel attracted, the success it brought was short-lived. Beautiful Books turned down the third novel I wrote for them and went out of business soon after. It took me a couple of years to get back in the game.

MEAT and Garbage Man were withdrawn from sale when Beautiful Books went under but Oak Tree Press were keen to rerelease them. Both books have had full makeovers inside and out and the new editions give me hope that they’ll be around for a long time. 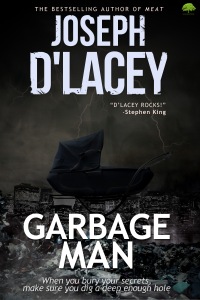 RK: What do you mean by ‘full makeovers inside and out’? ‘Out’ would indicate new covers. Does ‘inside’ indicate you’ve re-written parts?

JDL: Both novels have been re-edited and re-proofed. There were minor adjustments necessary on MEAT and the original Garbage Man was pocked with typos and other errors, all of which have now been addressed. MEAT has a new preface and Garbage Man a new afterword. Both acknowledgements sections have been rewritten and updated to reflect interim events and, of course, as you mentioned, they have brand new covers.

RK: I’m aware that the researching and writing of MEAT affected you deeply. How has that played out in your subsequent writing?

JDL: Ecological themes continue in some but not all of my work. After writing two adolescent protagonists for The Black Dawn series, I’m hoping to further explore rites of passage in future tales.

Both MEAT and Garbage Man are published by Oak Tree Press on the 28th of October.

Posted on October 6, 2013, in Book Reviews. Bookmark the permalink. Leave a comment.

Bride of the Book God

The Voice of Horror

Random musings on the world from someone work avoiding.

All things to do with books.

Musings and Reviews by Richard Kellum

The writer gives life to a story, the reader keeps it alive.

Musings and Reviews by Richard Kellum

My pen is my compass. I appear to have lost my pen.